Message Sent
Thank you for your inquiry. We will respond to you as soon as possible.

One Gift, A Lifetime Investment.

Meet your personal financial goals while making a difference for our future. 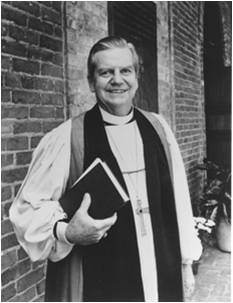 Founder of Seminary of the Southwest, the Rt. Rev. John Elbridge Hines was the primary influence in the establishment of the seminary in 1952 while he was Bishop Co-adjutor of the Diocese of Texas. He saw the need of the church to have a seminary of its own in the Southwest and established Seminary of the Southwest to equip people to proclaim the gospel in the world in which they live. Bishop Hines went on to become the Presiding Bishop of the Episcopal Church and led the church with courage and prophetic vision during some of the most difficult years of the century. Calling for the rights of all Americans during the tumultuous civil rights conflicts, he is known as one of the finest Episcopal preachers of the 20th century, exhorting the church to a vision of social justice.

We honor and pay tribute to John Elbridge Hines, the founder of Seminary of the Southwest, each year on John Hines Day. This celebration of his life and the life of Southwest includes chapel, fun and festivities for our friends, faculty, alums and students. Our 2010 celebration was particularly special as it marked the year of Bishop Hines' 100th birthday. In 2012 we celebrated the 60th Anniversary of our founding by the Rt. Rev. John Elbridge Hines.

Bequests and other planned gifts increase the seminary's endowment, grow scholarship funds and provide ongoing support, thereby ensuring the continuance of the Southwest mission—to prepare mature Christian leaders for ministry in all walks of life. The value of this particular gift grows with each generation of seminarians who are well prepared to do God's good work. Such a gift is truly a legacy.